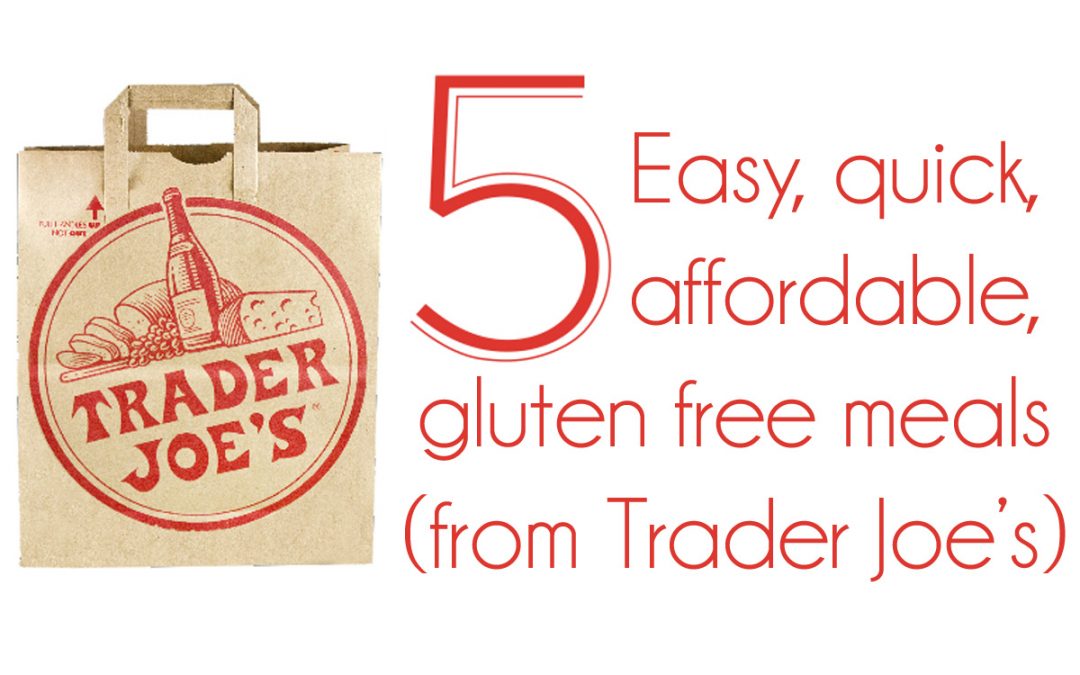 Hello and welcome to Mama in the Making, I’m Rochelle Serna and today I want to share five quick, easy, affordable, gluten-free meals from Trader Joe’s.

[0:15] So today I was at Trader Joe’s, I was walking around the market and I am awful at pre-planning what to eat the during the week, so I was trying to go through a list of foods that we like and get ideas from what I saw, and I thought that this could be a great video to share because people often wonder, you know, what they can eat that’s quick and easy; and because I’m not so great the meal planning and the recipe creation I thought that sharing my weekly meal list with you could be helpful to spark some ideas.

[0:46] So as I mentioned at the top of the video, the things that were really on my list for meals this week were: I wanted them to be very quick, something I can throw together without much thought, I wanted them to be affordable, I wanted them gluten-free—so we’re not necessarily always paleo but we do eat gluten-free. We have a focus on pastured meats and hormone and antibiotic-free things, organic and raw when it comes to dairies and things so that was important—and I also really like fun foods. So I try to keep it a little interesting on the foods, rather than the same old and—I don’t want to say boring, but simple dishes.

[1:30] So the five meals that we’re having this week, in no particular order…I have no idea when I’ll be making them yet it…is we’re going to have a zucchini noodle chicken pesto pasta. So that’s just zucchini noodles, a pesto sauce that I picked up from Trader Joe’s, and some chicken thighs.

Now thighs are generally healthier for you and they’re also generally cheaper. So that’s a good option if you’re going to have chicken, if you don’t mind the slight difference in flavor.

[1:57] So that is one meal and then the next meal is a stuffed sweet potato. So I got some sweet potatoes and some grass fed ground beef—Trader Joe’s has a frozen option that tastes really good and is a little bit cheaper than the fresh—and it is going to be seasoned with a taco seasoning that my husband makes, we’ll put a little bit of raw cheese, a little bit of guacamole on top, maybe some onion.

[2:26] The next thing that I have is a rack of lamb. So Trader Joe’s has a, also in the frozen section, frozen rack of lamb.

It’s really good, it’s already pre-seasoned and it’s very simple to make you just take it out the day before and then put it on the grill.

[2:50] The next one is really simple, we just bought some grass fed beef patties, make some lettuce wraps—they actually do have gluten-free buns now at Trader Joe’s, so if you’re ok with that you can pick those up—have a little bit of lettuce and some mustard on there, and some onions and will probably make that with some sweet potato fries and they have a mango coleslaw that they sell.

It’s just the pieces of it, there’s no dressing on it so we’ll probably have that on the side.

[3:19] And the last thing, because I can never have too much taco themed [food] meals for the weak, is nachos!

So I picked up some corn, blue corn organic baked chips from Trader Joe’s, and some ground beef that we’ll season the same, taco seasoning.

We have some raw cheese and guacamole, pretty much the same things that we will have on the stuffed potato, but we’ll just make sure to spread them far apart.

So hopefully that helps.

I’d love to hear your quick, easy, fun gluten-free recipes! You can post those in the comments and I will be talking to you soon! Bye!