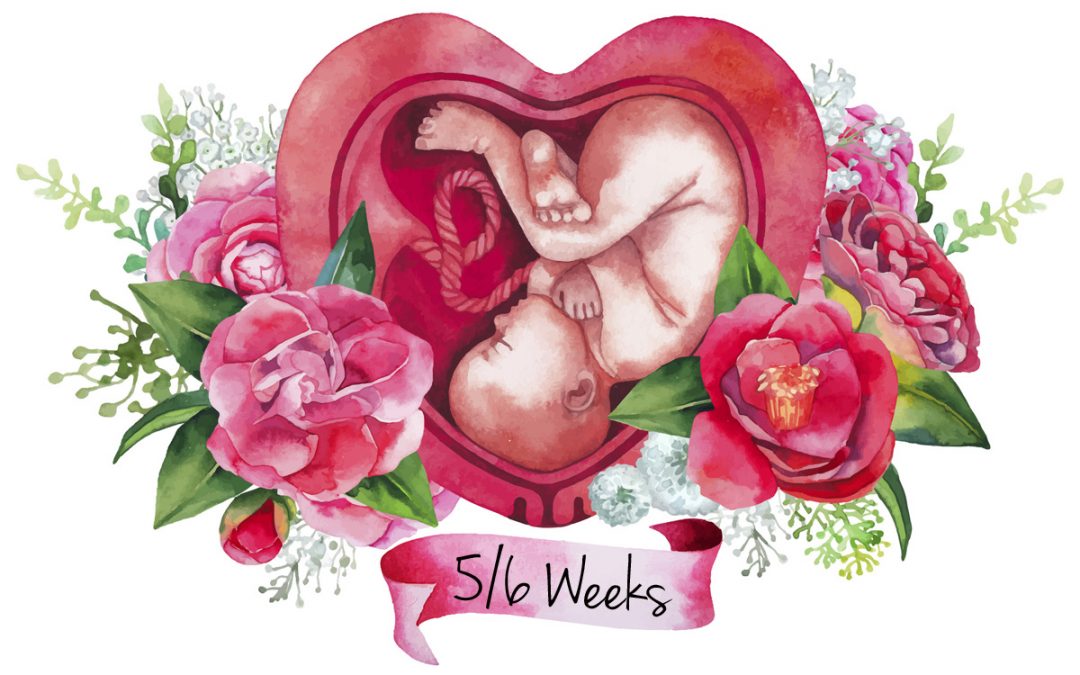 Hello and welcome to Mama in the Making! Today is my first installment of the pregnancy series, I guess that’s what I can call it, and and I’m going to be covering a little bit about weeks five and six since last week I announced and didn’t want to do another video—too many videos in one week.

[0:36] So five and six with baby. A lot happens with baby actually, in these first few weeks of pregnancy

It’s kind of strange, the way that they calculate it. So those first two weeks of what your 40 week of pregnancy are, you’re not actually pregnant.

It’s the first two weeks of the cycle before you ovulate, so there’s no baby in there. And then once you conceive your baby, once the sperm meets the egg then the egg is fertilized and that’s when baby growth starts.

So even though I’m now six weeks, baby is actually four weeks. And so that’s what…I think it’s kind of interesting. I remember the first time I was pregnant I couldn’t like wrap my head around it, but I was happy that it was like a shorter time I had to wait. Thirty eight weeks instead of 40 of actually being pregnant.

[1:27] But anyhow, the point of that was to say that those first two weeks of pregnancy, you know even that third week of pregnancy is so brand-new. The egg is implanting going into the fourth week, you know, it can take up to about 12 days for an egg to implant.

So you might not even be having any release of hormone until around that time. That’s why pregnancy tests won’t, you know, show a positive usually because unless the egg is implanted and the hormones are actually being released into your system, it’s not going to show up.

So most people find out that they’re pregnant, if you’re trying, maybe you find out right at the end of four weeks—I’m sorry end of three weeks—right before four weeks, usually around four or five weeks I’d say.

[2:11] And so this is really when changes start taking place really rapidly (for the baby at least). The baby starts growing; 18 to 22 days after conception their little heart already starts beating. So their body is really just growing at a crazy pace. They start you know around five weeks they’re maybe the size of a peppercorn whereas six weeks they’re already the size of a pea!

So they are doing…making some moves in there!

[2:41] And the mom, she might not be feeling things right away. She might, you know, her body might be having an easier transition, maybe even though hormones are flooding, and things are changing, and babies’ growing at a rapid pace.

And if anything, if she’s going to start feeling nauseous it would probably be the earliest around five weeks is when, really, the baby is rooted in enough to be releasing hormones and giving your body those cues that things are changing.

And then it usually isn’t until a little bit later that the nausea really kicks up a notch, and where changes really start happening to mom’s body.

[3:21] But for me personally, I already have quite a few changes going on. I did with Vincenzo pretty early as well, my first baby, but this time different things are happening earlier.

So I was nauseous at five weeks with both babies and then I didn’t gain weight as quickly with Vincenzo, but right now I’m already starting to see that my belly is holding on to weight differently, which is really fun because I love showing in pregnancy, so I’m hoping that that will happen, you know, sooner even than it did with Vincenzo.

And I showed pretty early with Vincenzo too.

But I’m definitely nauseous, I’m really, really tired already—because, if you think about it, I mean your body is giving so much to this new life.

And so like I said, some mom’s bodies really handle that well and they’re able to disperse the energy really evenly. I guess my body doesn’t do so well, I’m not really sure (laughs).

[4:21] And I guess, just a note on that—on how I’m feeling—I’m really trying to be in positive mindset because I (laughs),  I joke around that the first time I got pregnant I didn’t really know what I was in for, so I didn’t have that fear, I wasn’t scared I just kind of went for it, and then it ended up being really hard on me.

This time I know what I’m in for! So there’s some moments…I am better about it the last couple days, but that first week there were some moments where I got really down on myself and really scared for the future and totally psyched myself out.

When really, we don’t know. I have no idea what my pregnancy is going to be like this time.

Yes, I’m already nauseous, but maybe I’ll be nauseous at the beginning and not into, you know, week 25.

And maybe it’ll just be the first couple weeks? And also I have resources like my gemstones, which I’ve got a bunch I can share with you later, I picked up some yesterday or the other day that are really good for nausea during pregnancy. Those seem to be helping.

I also have acupuncture I really want to try. I have a better understanding of what my body might need, you know last time I was severely dehydrated. This time I’m not gonna let it get to that level, you know I’m going to make sure that I do what I need to do, whereas before I was just lost, I didn’t really understand what was going on.

[5:41] but anyway, so that is, you know, bodies are changing, and babies are growing, and there’s some incredible things happening in these first few weeks.

So even if you aren’t feeling anything it’s really cool to know how much is going on with your baby if you’re at this stage.

And I cannot wait to continue sharing with you the babies growth, and the mom’s growth, and my personal growth.

Hopefully I will be in perfectly good health and energy to share that all with you.

All right I’ll be talking to you soon. Bye bye!

To being newly pregnant,